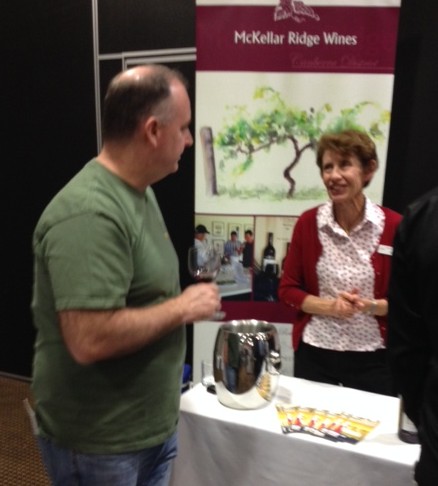 Just the thought of a wine tasting event sends my little heart aflutter, there’s something about seeing all those bottles of wine in one room, lined up just waiting for me to get my hands on them that sends a heady mix of excitement and anxiety through me – excitement about the wine obviously, and anxiety that I might not get to try everything! So when Scott and I were asked to serve at one of the tables at the recent Canberra District Wines event at Realm Hotel, it was like Christmas had come early.

While there were around 20 of our region’s wineries represented at the event, Scott and I were charged with serving a selection of ‘alternative and unusual’ wines from each of the winemakers. Our range included varieties such as Tempranillo, Graciano, Petit Verdot and Sangiovese which are more commonly found in Spain, France and Italy.

The Tempranillo from Pankhurst was a standout for me. More commonly found in the Rioja region in Spain, Tempranillo is a juicy red wine with low acid and low tannins which makes it easy drinking with or without food.  The Pankhurst version was soft and fruity but with good structure – the structure is important to me as without it, some fruity wines can taste like a big glass of Ribena, definitely not the case with Pankhurst! Tempranillo is becoming more and more popular in Australia with some experts claiming its growing in popularity more than any other variety – so one to watch.

Graciano is another Spanish variety being grown in Canberra and while it is much less common than Tempranillo, Mount Majura Vineyard took a gamble and have produced something unusual but very tasty. Graciano is usually blended with Tempranillo to produce Rioja wine and it’s rare to see it as a wine in its own right. Mount Majura has done a fabulous job with the 2013 vintage and this wine is well balanced with the fruit and flowery notes supported by good acidity and tannins. If you’re looking for something different to have with your Christmas turkey this year, than this wine would work well – and you can impress your family with your sophisticated palate!

The Petit Verdot from Barton Estate is the only wine of its kind in Canberra (at least to my knowledge, apologies if I’m wrong!) This variety is usually found in Bordeaux in France but it’s fallen out of favour somewhat in its home country as it ripens much later than other varieties in Bordeaux and has a reputation for being unreliable. Barton Estate seems to have tamed this grape though and their wine is a fragrant, slightly spicy version – similar to a shiraz but with softer tannins.

Other wine on our table included Sangiovese from Yarrh Wines. Sangiovese is the grape predominately found in Chianti wine from Italy and it is becoming very popular in the Canberra region. The Yarrh version is fresh and lively with good fruit notes of sour cherry – a good red wine for the summer months I think.

We also had a Pinot Noir from Wily Trout Vineyard as part of our range, definitely not an ‘alternative’ wine but when it tastes this good, I’m not complaining. I’m not usually a Pinot fan as I think it’s much hyped but very often not done well. However, the Wily Trout Pinot was one of the tastiest I’ve had in a while with notes of caramel on the palate while still keeping good structure and fruit.

This year’s event was a follow on from the Canberra 100 tasting held last year to celebrate our centenary. It also leads us nicely into the Wine, Roses and All that Jazz Festival this weekend – hope to see you there!