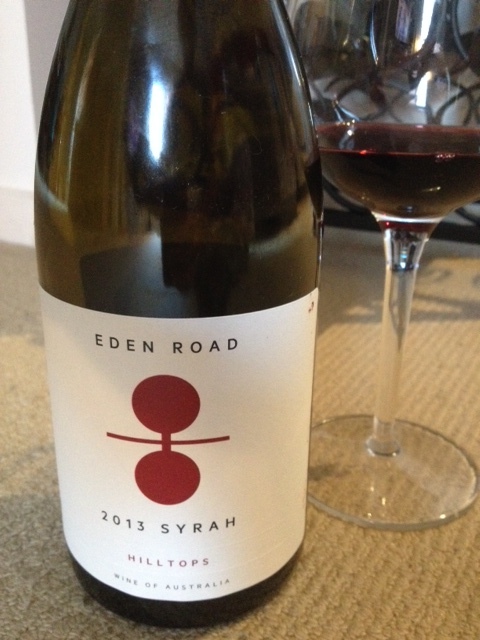 I have been meaning to open this wine for a while, it’s been sitting on our wine rack taunting me and while some may argue that a wine of this quality deserves a fancy meal, I think the posh burgers I cooked to go with it worked a treat. It would equally be a great match for something masterchefy but it was Saturday night and I was feeling lazy.

Anyway, onto the wine. Regarding the name, Syrah is what Shiraz is generally called in the Northern Hemisphere and Eden Road chose to use this reference to indicate the soft and delicate style of wine they have produced with this bottle. On the palate, this wine couldn’t be more different to the big, bold Shiraz wines that are generally found in the Barossa or Riverina.  The grapes were sourced a few hundred kilometres from Canberra in the Hilltops area around Young.  At around 500m above sea-level, I would think that these grapes took their time to ripen and in doing so, produced a more refined style of wine. There are no big fruity or spicy notes in this wine, it has savoury, vegetal notes almost like a pinot but I’ll talk more about the taste later. Syrah or Shiraz is Australia’s most planted grape variety but as this wine demonstrates, it varies so much across our regions.

This wine retails for around the $50 mark which is a little pricy but the Syrah was hand-picked and whole bunch fermented which probably drove the price up a bit.  Not separating the stems is considered by some an outdated process but I do hear more talk about it recently.  Riper stems can add some elegance and I understand this practice is used in some pinot as well.  On Eden Road’s website, the winemaker make reference to the ferment of this wine taking place under a `wild fermentation before being inoculated half way through`. Wild fermentation means no yeast is added to the grape juice after crushing and that the juice is fermented by whatever yeast strains happened to be in the air at the time. By inoculating half way through (ie adding a known yeast), Eden Road has combined two different fermentation processes. The thinking is that wild fermentation produces wines with greater length and improved texture as well as extra flavour complexity. Wild fermentation has its risks though as the winemaker has limited control over what yeasts are in the air, hence the reason for using a tried and true process half way through. This article is quite helpful in explaining in more detail: https://winemakermag.com/758-wild-yeast-the-pros-and-cons-of-spontaneous-fermentation

Either way I applaud creativity in winemaking.  I know enough to say that you really have to evolve in this job if you want to do more than survive.  To prosper and enjoy winemaking, you have to be trying new things or at least be prepared to apply practices from the past and make them work for you.  That`s what`s great about wine in Australia.  We are not ignorant by forgetting about traditional wine-making methods but we are prepared to try and do things better.

On to the wine. On the nose I could sense a light liquorice note along with a type of confectionary.  Remember those big red toffee apples that you enjoyed as a kid?  On the pallet I found smooth, dark chocolate.  The acidity is light to medium.  I didn`t get the spice that usually accompanies Syrah but maybe that`s just me.  I`m not going to say morello cherries just for the sake of it.  Overall this is a tasty wine, just don’t expect it to be fruity and robust, it’s a Syrah, not a Shiraz…!