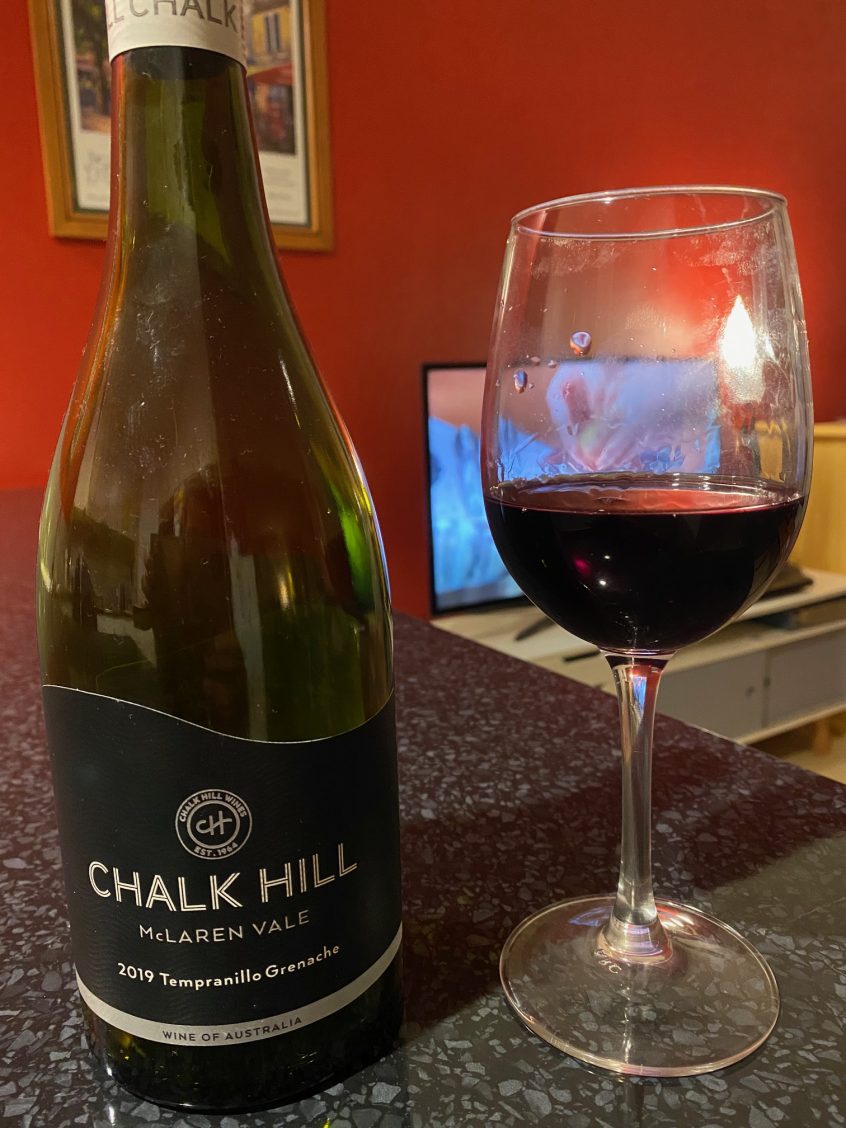 Another week without the bars, pubs and wineries means another order from Jim Murphy’s Market Cellars – strictly research of course. This week I ordered a few local Canberra favourites along with a some random bottles from the Barossa, Adelaide Hills and McLaren Vale. I like to keep my options open and while I tend towards cooler climate drops these days, as the nights draw in, I’m looking for a bit more oomph to my wines and thus South Australia was called in.

Tonight’s drop is the 2019 Tempranillo Grenache from Chalk Hill in McLaren Vale. I first tasted Tempranillo back in London at the Tapas Fantasticas Festival (which is just as fantastic as it sounds) and I’ve been a big fan of this Spanish varietal ever since. It’s popping up more and more around Australia, particularly in Canberra, so I was keen to see what impact the warmer McLaren Vale would have. Grenache is a typical variety of McLaren Vale – usually in the form of a big, bold GSM (Grenache, Shiraz, Mourvèdre) and I was hoping the Tempranillo would have a calming influence on this bullish style of grape.

Some nights I have to admit I do just glug my wine…however, occasionally, I try to do the right thing and have a big sniff, swirl and taste before settling in for a guzzle. The nose on this wine was very savoury, an almost meaty and mushroom bouquet which was not at all unpleasant. As the wine opened up, fruiter flavours were revealed with liquorice, plum and black pepper all coming through. It was an interesting and layered nose and I’m intrigued to find out what the palate will reveal.

Taking a big gulp, I taste plum and mushroom as the dominate flavours. There are hints of vanilla and a creamy finish indicating this wine has had some aging in French oak and has probably been through malolactic fermentation – this is the process that converts harsh acids into softer (creamy) lactic acids. There is good spice to the wine and a long lingering finish. I do like a bit of tannin on my wine and this one delivers – not too harsh but enough to know that you are drinking a decent drop. This is a well balanced wine and it was a great match with Scott’s pork and apple stew – Cheers!